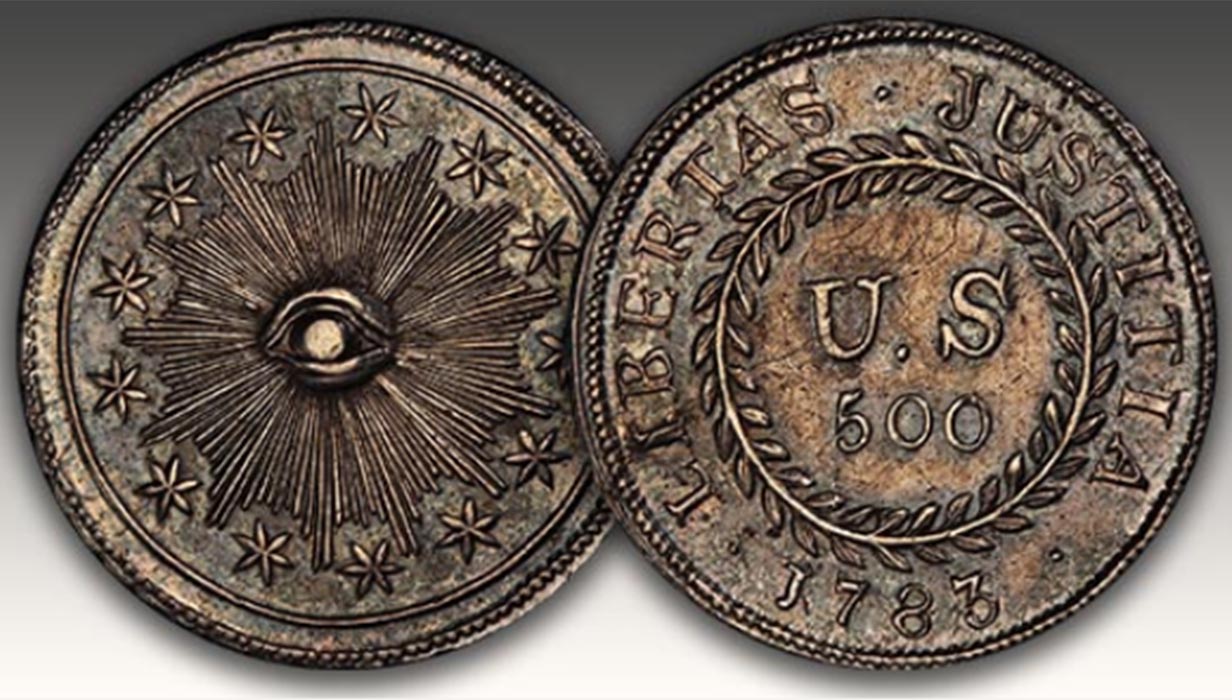 In 2013, David McCarthy spotted a rare coin in an auction catalog and immediately had a hunch it was the first coin minted by the fledgling United States of America in 1783. Not the first run of coins, mind you, but the very firstone.

"The day of the 2013 auction in Schaumburg, Illinois, McCarthy sat in his hotel room with his files and air conditioning cranked on high. He methodically convinced his boss, Donald Kagin, that the coin up for auction was the nation's first. It was a nuanced case since other dealers claimed it was a forgery. But the initial explanation was that mints tended to add inscriptions to the steel dies used to make coins after having engraved the images."

He spent the next four years digging up evidence to prove that he had indeed purchased the fabled first "500" quint.

What first caught McCarthy's eye was the fact that the coin, which was unmistakably one of two rare quints, had no inscription on the front. A similar coin, with a Latin inscription that translates "New Constellation," was found in 1860. The one McCarthy bought was found about 15 years later and was therefore designated "quint Type 2."

He searched through the National Archives, but got conflicting answers. Then, as he was reviewing the receipts for the steel dies used to make the coins, he found evidence that "two of the dies had been recycled and refined after the first coin was struck," the AP writes.

"He compared the beadings on the edges of the different coins, as well as a dent in the eye at the center of the [inscribed] "500" coin and its plain cousin. The evidence all pointed to him having uncovered the nation's first coin," the news agency says.

If McCarthy's evidence is solid, the coin he has was mentioned in the diary of Robert Morris, a Philadelphia merchant who financed the American Revolution and signed the Declaration of Independence. From 1781 to 1784, when the young nation was still governed by the Articles of Confederation, Morris served as the superintendent of finance for the United States.

In an April 2, 1783, entry in his diary, Morris writes of "a Piece of Silver Coin being the first that has been struck as an American Coin."

A week later, he was visited by Alexander Hamilton – who was to become the first Treasury secretary of the United States six years later and who presumably examined the coin himself. Thereafter, Morris writes, the two corresponded on the "subject of the Coin."

A fuller set of coins was minted on April 22 and forwarded to Thomas Jefferson so a third Founding Father could weigh in on the design.

Morris' coin was meant to demonstrate a prototype numerical currency system that would be based on the so-called Spanish dollar. It was never adopted.

Coin Week writes: "It is believed that these two Quints are survivors of that [Morris system] project, as are five or six pieces of other denominations."

How much is McCarthy's quint worth? The AP quotes the ANA's Garrett as saying the closest comparison might be a 1794 U.S. silver dollar that sold for $10 million four years ago. It's not just the coin itself, but the story that goes with it that makes it valuable, Garrett says.

And there's no question that if McCarthy is right, his quint has a fascinating story to tell.

Holy Sh*t, That’s Rare: A Horseman $10 of a Different Color